Posted on November 24, 2010 by meredithelaine

It’s almost Turkey Day, and I’m already reveling in the fact that a local radio station has started playing the yuletide hits.

So, Eric and I have had a couple of invites to dinner parties and other such shindigs for Thanksgiving.  Of COURSE, being me,  I start fretting over “What on EARTH can I make that won’t make folks gag or potentially kill them?”

And Eric starts rambling about something called No Bake Cookies.

His reaction:  “It’s true! I just have to find the recipe, I know I have it somewhere.”

So I automatically think that this is some Just-Outside-Of-Houston-Texas-Uber-Secret-Family-Recipe-of-AWESOME, y’all.

Google let me know that I was sorely mistaken.  Apparently this is well-known.  Popular, even.  Some cocoa, some peanut butter, some vanilla extract, some quick oats and some other crap and TA-DA! COOKIES.

Despite the fact that I was a bit disappointed that I was not having some recipe from the days of yore passed down to me (and therefore cementing my existence in Eric’s family FOREVAH, MWAHAHAHAHAH!), I’m still psyched about this.  Eric says the cookies are delish.  I’m just excited that I don’t have to risk potentially burning my house down.

So I picked up 90% of the ingredients yesterday during my lunch break.  The dry-goods part.  We have butter and sugar at home, and I got milk at the local corner store.

And THEN, because it was 11am on a Tuesday, and I am a classy broad, I walk right into BevMo.  And I pick up a bottle of Almond Champagne (which I first tasted on the Corporate Shmoozefest Wine Tasting a few months ago), and some White Creme de Cacao and Creme de Noyeaux.  The latter 2 make the BEST holiday drink EVER – Pink Squirrels!

This will probably end up being somewhat telling, but my father used to make Pink Squirrels during our Christmas parties when I was a little kid.  Technically, you can add cream or milk, but my dad used vanilla ice cream!  Which of course, totally made it like a milkshake, which was totally appropriate for a 4 year old to drink.

I definitely spent a couple of Christmasses a bit tipsy back in my youth.

But I hadn’t thought about this drink for YEARS, and all of a sudden, it was a wave of nostalgia for me.  Little MeredithElaine, sipping a Pink squirrel, playing with my 2xl and Pong, getting kissy-faced by my 70-year old aunts, and listening to the Salsoul Orchestra’s Christmas Jollies.

I get home last night and immediately set to work.  Now you have to understand, I have 1 measuring cup, 1 mini-measuring cup sorta thing, and almost no counterspace in my kitchen.

Kitchen Chaos. Yes, that's booze in the background. I PROMISE you none was consumed during the cooking/baking process.

I am panicking, because I feel ill-prepared, PLUS even though these are No-Bake Cookies, there is still some prepwork to be done.  In a pot.  Over the stove.  This did not look very promising to start:

See that big chunk in the middle? That's BUTTER. Was I supposed to pre-melt it? I don't know. The recipe didn't say anything about that.

Eventually, the mixture gets smooth, and I take this stuff off the heat, and start to combine in the rest of the ingredients:

I know, your mouth is watering right now, isn't it.

So I’m stirring, and stirring and then start doling out cookie-sized blobs onto the wax paper. 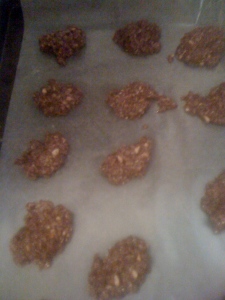 We only currently own 1 cookie sheet, but we do have a baking pan, so I decided to put the rest of the mix into a pan, so that later I could cut them up into little square pieces.

Now, here’s the thing.  I tried the mixture.  It was really good.  I tried one of the finished products – also very good.  Dense, but good.  Eric tried one when he got home from work.  He said that they totally reminded him of his childhood.  So I’m taking that as a good thing.  Neither of us got ill from the cookies, so I’m pretty sure they’re safe to bring to the Thanksgiving festivities.

But lordamercy does cooking make me tense.  It was not fun.  Ingredients and measuring and instructions and fear of failure and fear of burning down the house…

THIS is why I live on microwave meals 90% of the time.

Tonight, I’ll be partaking in the ancient Thanksgiving tradition of heading to the local watering hole, singing karaoke and drinking Coors Lights.

Happy Thanksgiving.  May your turkey be moist, the stuffing savory, the salmonella poisoning non-existent, and the tryptophan-induced slumber restful.

forty-something. jersey girl in texas via california.
View all posts by meredithelaine →
This entry was posted in Uncategorized and tagged back in the day, domestic bliss, i am not, the next food network star. Bookmark the permalink.