Posted on December 12, 2010 by meredithelaine

Last night was the Company Holiday Party.  It was held at one of those fancy pants, yet grill-your-own sort of places.

Luckily, we had someone to grill for those of us who didn’t want to/don’t know how to: 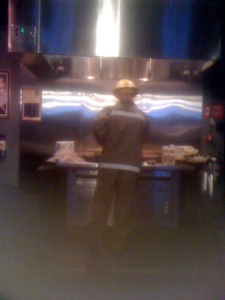 He's a retired fireman; his wife played piano for us during the party.

I think most of us were too busy drinking, chatting and carrying on to be bothered grilling our own steaks.  Our fireman/grillmaster did a great job.  Everything at this place was delicious – the steak, the onion rings, the jumbo shraaaaamp cocktail (seriously, they were HUGE, you can’t just call them shrimp), and the fried calamari that had this fantastic sweet and sour sauce on it (which you wouldn’t expect to be so awesome, but it was).

Then management gave a couple of year-end awards. 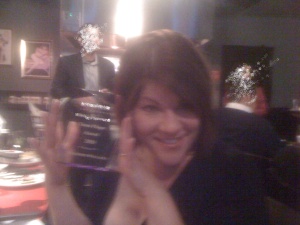 Lookie what I got!!

(Yeah, I blurred out a few faces in the picture and the company name that’s on the award)

I got the Team Player Award!!!  It’s all glass and fancy and etched with our logo and my name and all that good stuff.  I am pretty damn psyched.  Truth be told, I almost started crying, because I am a dork and a sap.

So THEN we move on to the White Elephant Gift Exchange.  Lots of gift cards, lots of booze, and some silly things as well.  The gift I put in (don’t tell them it was me!) was a BevMo gift card and a Justin Bieber calendar.  And the gift that *I* got in the exchange???

Now, one would think that this was one of the booby prizes (heh, I said BOOBY).  And honestly, it was probably meant to be as such.  But I CHOSE that.  I could have grabbed a present from the pile or stole something else, but I’ve had my eye on the Shake Weight for a while.  Yes, I’m THAT PERSON who’s actually thought of buying one.  So, why wouldn’t I jump at the chance to snag one for free?

It comes with an instructional DVD, you know.  There’s gotta be some comic gold on that thing.

I mean, useful information, that is.

So yes, the party was lots of fun.  Until it wasn’t.  Because it was all DRINKDRINKDRINK! PARTYPARTYPARTY! FUNFUNFUN!  And then OH GOD, I HAVE TO GO HOME.  NOW.

I hate when the severe drunkenness sneaks up on you.  AGH.

A 12 mile cab ride was NEVER so long and torturous.

The good thing is, is that we got to take a cab there and back (because Management wants us to party, but be safe about it!), and I get to expense it.  Round trip was about $90.  GEEZ, that’s enough to make me re-nauseous!

I vomited all the colors of the rainbow, about 10 times.  I was a floppy doll mess of limbs.  It was horrible.

THIS is why, under normal circumstances, I stick to my Coors Light.  My body can handle that.  Tanquerey and Tonic, plus red wine…not so much.  I should have recalled that from the night I got engaged.  But noooooo.  I had to get all fancy pants and the fancy pants holiday dinner.  Be a big girl and drink big girl drinks like everyone else.  Idiot.

At least I was home before it got ugly.  Eric took such good care of me.

Today, I woke up a bit out of sorts, but not terrible.  I watched a little Food Network, then napped for another hour or so.  I then went out for breakfast with 2 friends.  Then I came home and did laundry, swept the house, dusted, mopped, did dishes, and made my batch of pasta for the week.

So, although there was a smidge of time in which I was, in fact, a chump – I have, overall, emerged from this weekend, a CHAMP!

forty-something. jersey girl in texas via california.
View all posts by meredithelaine →
This entry was posted in Uncategorized. Bookmark the permalink.