Sippin’ on some Sizzurp…

Posted on January 8, 2011 by meredithelaine

It’s all been put off to the side while I sniffle, sneeze and cough.  My nose is red and raw.  The sinus pressure in my head is intense.

My doctor doesn’t think it’s an infection at this point.  Although she did prescribe me antibiotics to pick up if I don’t feel better in a few days.  She recommended a Neti-Pot, to which I promptly said, EW, NO. I told her that I have a steamer, and she said that would work.  I also got some nasal spray and some Codeine syrup.

While I was there, I also got a refill on my blood pressure medication, Ambien and Xanax.  My doctor is so good to me.  Now I can properly survive the next 85 days before I get married.

My blood pressure (in case you were wondering) at my appointment the other day was 135/80.  So pretty much a-ok.  Still a teeny bit high, but MUCH better than the 190/110 it was a few month ago.

Victory is short-lived, when I think about how much I have to do before the wedding.  I am far behind, I think.  I start to think of wedding planning, and things that need to be done, and I know it should be like this: 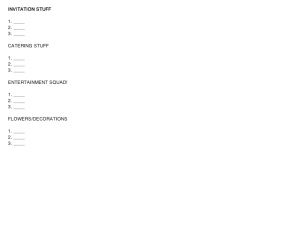 THIS is how it all looks in my brain when I start to think about it. 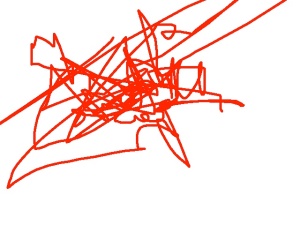 So I end up just shutting down.   If I don’t think about it, then it won’t stress me out.  The flowers will somehow mysteriously appear on the tables and arrange themselves.  The invitations will address and send themselves.  It will all be fine.  Right?

I have no idea what timeline I should be following, and how to do certain things.   Sure, websites like TheKnot give you general ideas, but it’s not specific to ME and MY LIFE and MY TOWN.  What I really need is a coordinator or something.  Someone who will DO THIS SHIT FOR ME. But…that costs money.  And…I’m also a control freak.  If it’s going to be done, it has to be done right, and it has to be done by me.

BUT I DON’T KNOW HOW.

Eric doesn’t want to fuck up the wedding.  Little does he know that he won’t – I WILL.

There is so much pressure to have a good wedding.  I have friends who are so excited about this wedding, calling it the “Wedding of the Century” and other such things.  And since my parents are being extremely generous and paying for the vast majority of the wedding, I’m trying to cut corners where I can.  I want drapey fabric and twinkle lights, but that’s not going to happen.  I’d love to just have a florist take care of the centerpieces and bouquets, but that costs a lot of money.  So now I have to try to find a wholesale flower shop and try to put something together.  Luckily, my mom and a friend of mine have offered to help…but the GUILT.  UGH.  I feel guilty asking anyone for help with this. Seriously.  People have better shit to do than help out with my wedding.

Which is probably going to suck because I really have no idea what I’m doing.  What a great way to start off a life together.  If I can’t pull off a decent wedding, how the hell am I going to be a decent wife?  Friends and family, some of whom I’ve haven’t seen in forever, are going to see my half-assed attempt at trying to pull off a wedding, and LAUGH. And disown me. And look at Eric and shake their heads in disbelief.  Poor, poor guy.  He seems so nice.  What has he gotten himself into…?

Now I’ve worked myself into a panic attack.  I’m sick as a dog, but yet I’ve been up since 7:30am, addressing invitations, doing laundry, sweeping and cleaning.  And convincing myself that my wedding is going to be a big, messy disappointment.  With only myself to blame.

forty-something. jersey girl in texas via california.
View all posts by meredithelaine →
This entry was posted in Uncategorized and tagged domestic bliss, down with the sickness, fitness queen, picture this, she's got issues, wedding bellz, what am i doing with my life?, why am i so tired?. Bookmark the permalink.

2 Responses to Sippin’ on some Sizzurp…