Posted on December 18, 2011 by meredithelaine

It’s been a crazy couple of weeks, and the holiday season is in full swing.  Who needs a nap? I do, I do!

A few weeks ago, Eric and I had the opportunity to meet Sam The Cooking Guy.  We were able to sit in on an episode of his Livecast.  And let me tell you – Sam, his family and crew are SO NICE.  We really had a blast.  They were extremely hospitable, and it was great for me to meet someone that I really admire.  Oh, and I highly recommend French Toast Mountain. It’s delish. 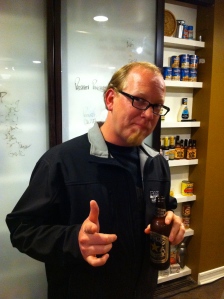 Me in my glory, in Sam's kitchen

I said to him, “You know, you give me hope that I can actually cook someday.”  And he said to me, “You can, and you will.”

Fast forward about 2 weeks later to this weekend.  I’ve been invited to a Cookie Exchange party of sorts, and I decided I would try the Potato Chip Cookies that Sam featured on one of his shows.  To be fair, it was a “Viewer Recipe Episode” – so I can’t really blame Sam for the Epic Fail this became.  It seemed to work out well for him, so I honestly thought:  this will be easy-breezy, and I will WOW everyone with my awesome.

Saturday afternoon, I decided to embark on this challenge.

I knew IMMEDIATELY that I was in for trouble.  I could not control my hand mixer.  I had it on the slowest speed, and yet, the damn thing was flying all over the bowl.  There are probably still specks of dough in various spots of the kitchen.

4 sticks o' butter, just like the recipe said. It called for "softened butter" - I'm not sure what that means, so I put them in the microwave for a few seconds...?

It was getting all stuck in the beaters! Very frustrating. Not frustrating enough to take a swig of Eric's Jameson, though. Whiskey/Bourbon/Scotch/Whatever is nasty to me. So, it'd have to be a dire situation for me to dive into that bottle. 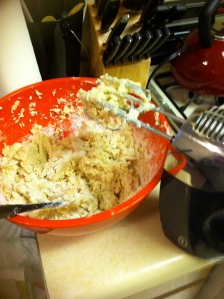 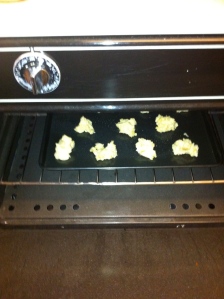 At this point, I am feeling very positive. I have gotten over the hand mixer panic, and I have sampled the dough and it tastes pretty yummy.  The recipe said to bake them for about 10 minutes…I decided to check after 8 minutes, just in case.

This broke my heart.

The cookies were flatter than pancakes, somewhat burnt on the edges, and pale in the middle.  And bubbling.  And bathing in a pool of oil.  See, I had sprayed the cookie sheet with Pam, because I felt like I remembered my Mom greasing cookie sheets when I was a kid.  I figured…no harm, right?

At this point I have gotten all wibbly-chinned, which quickly evolved into full-blown SOBBING.  I am hysterical at this point.  I called Mom and cried to her. I’m sure she thought I was ridiculous.  She said that I may not have needed to grease the sheet, the temperature of the oven may be off…it could be a number of factors.  She told me it was okay to keep the dough in the fridge overnight, and that I should try again.

So, I did. I tried again this morning.  Batch 2.  No grease.  I checked the cookies after only 6 minutes and got THIS:

Burnt worse than the first batch. Smoking. Bubbling in the middle. Trying to take the off the sheet resulted in a slimy, floppy mess.

Cue the tears. AGAIN.  Eric probably thinks I’m absolutely unhinged.  Of course, after our tree almost fell over on top of me while I was decorating it the other night, I’m not feeling overly confident about my first Christmas as Eric’s wifey, you know?

The remainder of the dough got scrapped.  2 failed batches is about as much as I can take.  I really can’t figure out what went wrong, though there have been several suggestions – oven issues, too much grease, lack of baking powder…?  But I printed out the recipe right from the website, and the reason I chose it was because it didn’t have a lot of ingredients and seemed easy.  Sam tried it on his show and was successful.  So…I’m at a loss.

So, I’ll be going to the Cookie Exchange cookie-less.  The hosts know this, and let me know, actually before the CookieFail, that if it didn’t work out, not to worry.  They know that I’m…culinarily challenged, and said it was more than enough that I even tried.  I just feel bad because I was SUPER-EXCITED to try these cookies.  I was boasting about how delicious they sounded and how easy the recipe appeared to be and OMG I’M MAKING COOKIES, yo.

Last year, I made No-Bake Cookies, so I really thought that, you know, after over a YEAR, I could move on to the next step, involving ovens and shit.

Christmas is coming, and my friend and I are once again, hosting a get together for a few close friends who don’t have family around locally (or want to get AWAY from their families on the holidays, you know, whatevs…) – which, again will involve epic amounts of cooking and preparing of foodstuffs.

I really enjoy the process of cooking. I want to be good at it.  I want what I prepare to be tasty, and also a reflection of my love for people.  You know: I love you; let me show you how much…with a casserole!

It would just really suck if that turned into: I love you; maybe we should order some Chinese take-out.  Or: I love you; here, chug on this Pepto while I drive you to Urgent Care.

forty-something. jersey girl in texas via california.
View all posts by meredithelaine →
This entry was posted in Uncategorized and tagged domestic bliss, the next food network star. Bookmark the permalink.