Stomp (out the stigma)!

(The motto of the walk is Stomp Out the Stigma of Mental Illness…and for whatever reason, it made me think of the song “Stomp” from back in the day!) 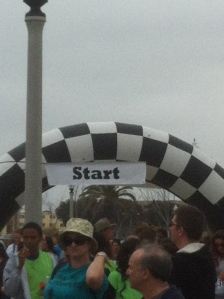 Yesterday, I did a 5K, for the San Diego branch of an organization called NAMI (National Alliance on Mental Illness).  To be quite honest, I don’t know a ton about NAMI.  But I do know about mental illness.

Most people who know me well, know that I’m pretty open about what I’ve affectionately termed my “cuckoo-crazy” — I can, and do, joke about it quite often.  I’ve suffered from Major Depression since I was 12 (damn – that’s 25 YEARS).  As I grew up and grew older, more ailments came into the mix – anxiety, panic attacks, Bipolar/Manic Depression, ADD, OCD, Borderline Personality Disorder, Eating Disorders and Self-Injury. I’ve been in and out of therapy, and on and off so many medications; diagnosed and re-diagnosed.

All in all, I’m doing okay, though.  I have awesome friends and family, a kick ass husband, a career (As much as it pains me to say that, LOL.  Never thought of myself as the “career type” – but bills gotta get paid, ya know).  Truth be told, though, I don’t always FEEL okay.  Sometimes, it gets to be too much, and I don’t know how to go on.  It takes everything in me just to get through the day.  I often want to give up.  As a result, I have a tendency to go into hiding – I’m not the most reliable of friends in that respect.  I often wonder why people haven’t given up on me yet.  I can only hope that in some way, they understand and don’t hold it against me (too much).

In the later part of last year, I fell down a black hole (metaphorically speaking).  I gained back all the weight that I had lost in the first half of 2012, became quite antisocial, etc.  In early 2013, I made a half-assed New Year’s resolution – to do SIX 5Ks.  Yeah, this coming from the chick who hates working out and getting sweaty (EW!).  So, of course, it’s now April, and nary a K has been done! I started looking up various 5Ks (Color Run, Retro Run, and things of that ilk), and came across the NAMI Walk.  I decided to sign up.  I’m not on a team, nor am I pushing to raise funds (although I made a donation myself, as did my mom and one of my mom’s little-old-lady friends from church).  I didn’t tell anyone (except for my husband) that I was doing it UNTIL yesterday, when I arrived at the site of the walk.

I decided to do it for ME.

So, I did it.  I started off walking, because most of these walks start off slowly, just a wad of people trudging along.  But after about 1/2 mile, I started to jog.  I only took 2 or 3 breaks to walk, about 30 seconds to a minute, for the rest of the distance.  My time was 47:34.  I’m a total novice at this, and hardly a speed demon.  But I DID IT.  And it has given me the confidence to continue to do it again! 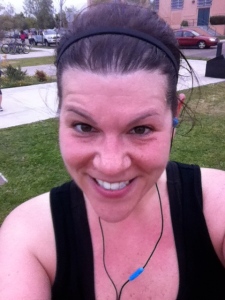 The sweaty, flushed face of victory!

Today, I am achy as hell.  My knees and quads hurt – I’ve been icing them with bags of frozen veggies.  But I feel so accomplished!  I did actually feel the “runner’s high” afterward.  I was absolutely GIDDY.  It was awesome.  It’s a feeling that I want to continue to chase and obtain.  And this is clearly something that is good for me in so many ways – de-stressing, getting fresh air and exercise, burning calories and fat, clearing my head…so many benefits.  I got one of the Couch to 5K apps for my phone, so that I can train and continue to improve.  I kinda just jumped headfirst into doing this one, and since I’m not terribly in-shape, that’s probably not the best idea.  But at least now I know I can do it.

And I’ll keep on doing it.  Much like my struggles mentally/emotionally.  Sometimes it’s easy; sometimes it’s hard.  Good days and bad.  Triumphs and difficulties.

You just gotta keep on keepin’ on.

forty-something. jersey girl in texas via california.
View all posts by meredithelaine →
This entry was posted in Uncategorized and tagged fitness queen, she's got issues, stuff i'm nervous about posting, YAY ME!. Bookmark the permalink.